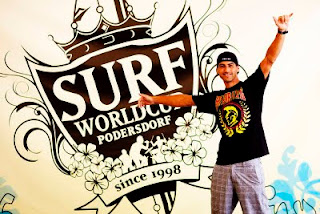 Photo by John Carter/PWA
This traditional and high scale contest is always organized on the highest possible level. 40 riders from 17 countries were registered, all of them were provided with free lunch and drinks, and the Top 16 were granted with free housing. Crowds of people came there not only to watch the best professional riders competing but to have fun on the famous Podersdorf surf parties as well.

First days were windless with shining sun, lots of music, lots of interesting people and plenty of stands, where it was possible to meet the representatives of windsurfing brands, shops, magazines and web-sites. 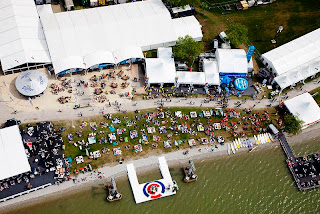 Event site from above. Photo by John Carte/PWA
Soon the Surf Magazine Tow In Night Contest with the prize money of €1000 was organized by EFPT and Surf magazine. The Top 16 riders were allowed to participate each having 2 attempts with the best one considered. Top 4 – Gollito, Steven, Taty and Tonky became the finalists automatically. 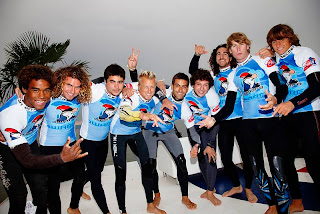 Freestylers ready to rock. Photo by John Carter/PWA
Qualification heats for the other 12 were scheduled for the evening and the final – for the night with spotlights for more spectacular effect. It was my first Tow in session and in my both attempts I was performing Funnel One Hand. It was quite difficult to speed up with jet-ski and to get into footstraps, but I'd managed it from the first time. I could not reach the Finals but gained priceless experience and excellent pictures. And the winner was the 4-times World Champion Gollito Estredo who jumped Burner 900 Diablo! 2nd was Steven with his Air Funnel 900 and the 3rd – Tonky Frans with Burner 360. 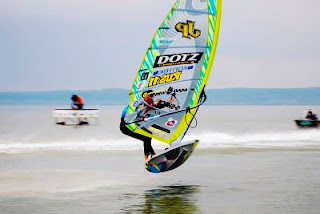 Funnel One Hand. Photo by John Carter/PWA
One day all the riders were invited for local wine testing with the Major of the city followed by the night tour to Bratislava on the Red Bull double-decker.

The wind started to blow on the last days allowing to have Single Elimination on 4.7 sails and Double Elimination on 5.3 m2 and more. The contest was won by 2-times Europen Champion Steven Van Broeckhoven! It is his first PWA triumph! Steven was jumping sick and high-amplitude Konos,  Air Flakas, Ponches, Culos, Burners and Air Funnels not leaving any possibility to his competitors. Kiri Thode, who was not aggressive enough, was the second, but all his tricks were superb, especially his signature Kabikuchi. And the 3rd place was taken by the young Dutch Davy Scheffers who managed to defeat Gollito Estredo! He caught the drive and was able to perform all his best tricks that he learned and trained in Bonaire. My genuine congratulations to the winners! 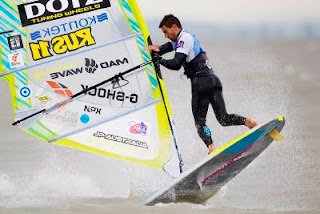 Spock. Photo by John Carter/PWA
Russia was represented by me, Yegor Popretinsky from St. Petersburg, and Vladimir Yakovlev from Taganrog. Vova showed the praiseworthy level but unfortunately could not reach the Top 16. Most of the time Vova is training in Egypt and conducting surf-clinics around the world. He wins the top places in all Russian freestyle contests so I hope we will see him in other PWA and EFPT competitions this year. 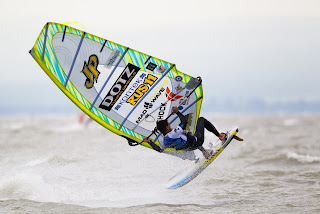 Speed loop. Photo by John Carter/PWA
I was the 9th in Single winning over Sebastian Rama from France. My heats was pretty steady, I was performing my tricks with good amplitude and speed - Shaka Flaka, Double Flaka, Switch Chacho, Funnel, Ponch and Front Loop on both tacks – but was stopped by the Belgian Dieter Van der Eyken who had dramatically increased his level this year. In Double Elimination that started at 6.30 next morning I managed to defend my 9th position winning over the French Julien Mas and Brazilian Ian Mouro Lemos. It was very cold and very light wind, with possibility for planning only in wind gusts so in the battle for 7th place was defeated by Davy Scheffers, probably because 10 kg difference in weight was pretty important in this condition. 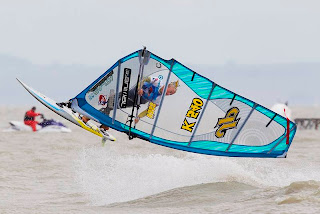 Ponch from Andy 'Bubble' Chambers. Photo by John Carter /PWA
I want to mention the other NeilPryde and JP-Australia riders – the German Tilo Eber and Brazilian Ian Mouro Lemos, young perspective riders, who shared 13th place in this contest, Andy 'Bubble' Chambers from UK and Bryan Metcalf-Perez from USA who were the 17th. Unfortunately #5 of the last year PWA event in Podersdorf Maarten van Ochten was not participating this time due to the injury. We wish Maarten the fast recovery and good luck in the next competitions to all NP/JP riders! 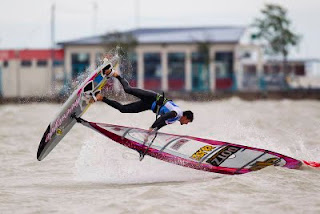 Ponch from Ian Mouro Lemos. Photo by John Carter /PWA
Now I have the 12th place in overall PWA rating and have a very good chance to reach the Top 10 this year again. I am happy with my result in Austria but I hope that my future results will be improved. I am looking forward for another 5 PWA and 4 EFPT contests as well. Thanks to my sponsors, family and friends for all support. It looks like I will be home in Russia only in the autumn. 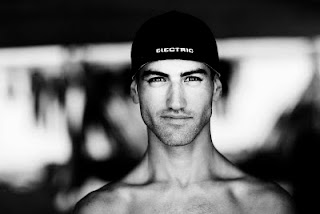 Photo by John Carter/PWA
Now I am in Moscow, organizing visa and flights to EFPT Milos Beach Lefkada Open 2011 contest that will take place in Lefkada, Greece on the last days of May.