Sylt, the spot that was hosting the last freestyle contest of the year, is the sandbar in the very north of the Germany connected to the mainland by the 10 km jetty with the train going on it. This is the very popular local resort and the island seemed to me to be covered with villas, hotels, restaurants and clubs. The easiest way to get there was via Hamburg, where I put my equipment to the supplied by the organizers transport in the airport and 200 km and 3 hours later was there myself. The prize fund for the contest is 30K EUR (same as in Lanzarote and Fuerteventura) and 29 male sailors were registered this time. 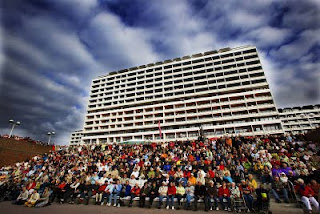 Unfortunately 2 JP sailors - British Andy “Bubble” Chambers (K-540) and Dutch Maarten van Ochten (H-73) were not able to come over. I wish them fast recovery and more luck next year.
I had many reasons not to participate in the final contest. At the same time there were 3 Russian tours – 2 on the Black Sea and one on Azov Sea and my Russians sponsors were twisting my arms to force me to promote their sales instead of reaching results in the sport.
Most fortunately for me Russian off-shore business represented by “5 Squares” windsurf school in Dahab helped me with my trip.
But I still had big troubles with equipment – I had no board. So I have to thank Normen Gunzlein (G-186), Ian Mouro Lemos (BRA-85) and especially Antxon Otegui (E-169), who helped me here and provided me with his “lucky” 2010 JP Freestyle board for competition. These chaps are not only my team-mates but true friends as well and I was very happy that they gave me all support to overcome the trouble. By the way, now I know that the boards of JP-Australia 2010 are really amazing!)))) 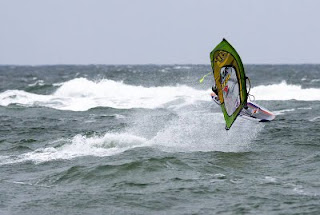 Besides that I was not very self-confident as because of common problems I came to the competition without proper training for the first time. I was not on the water since JP Young Gun Camp in Rhodes for 1,5 month and was just skateboarding and jogging with my friends.
Difficult conditions of Sylt demand corrections in tactics, but I was lucky to know it and was ready to fight.
In my heats I was doing most simple tricks, but in the nice manner and was trying to plane on the water surface. My program was simple: port tack - flaka, shaka, front loop, spock, shove-it into spock, grubby, willy skipper, and on starboard tack – e-slider, switch chacho, funnel, front loop and willi skipper.
Being not in the best form and using unfamiliar equipment you can perform only easy tricks not to be in danger, but in conditions of Sylt only top-riders can afford to go for difficult ones and I was targeting the following- I was the 10th, if I will not go to Sylt I will be only 20th, and if I go, the worst possibility was to become the 12th.
First heats of the day had to be restarted due to bad wind conditions. But later I managed to win over Brazilian Levi Lenz (BRA-91). He was he 13th in rating, so it wouldn’t be good for me to be defeated by him, but I was lucky and Levi “forgave” me. 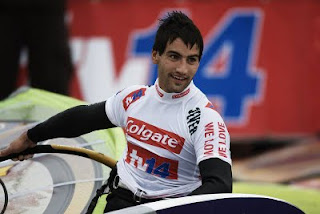 Antxon Otegui (E-169)could not start the heat with me as his injury did not allow him, so I managed to get into the final eight without any struggle.Next heat was against Franch Nicolas Akgazciyan (F-400) for the place in the semi-finals. Nicolas gained a lot this year – he was very good in our heat landing lots of beautiful tricks, nails many trick in switch stance, shakas and many more… and I was falling a lot… But the fact that I was in the final 8th meant that I will stay in the PWA Top Ten.
Unexpectedly all my friends from the North Sails Team Andre Paskowski (G-2), Marcilio “Brawzinho” Browne (BRA-105) and Jose “Gollito” Estredo (V-01) became the losers of semi-finals like me (most probably that was the team Spirit ;)) The release of “the Four Dimension” was so successful the day before but they still could not separate.
I can seriously consider that that day God was speaking Netherlandish. Frans brothers were really inspired and Kiri Thode (NB-61) just reminded that not only the World Champion could be the best. Why the Bonaire style was so successful in Germany and in entire PWA? I would dream to go there in spring and check it. Steven van Broekhoven (B-72) benefited from Bonairean Shaolin and probably I should go to discover some Caribbean secrets as well.
Feeling very high I aced in the Double Elimination against boss of the ultimate windsurfing bible and dvd "Tricktionary"Austrian Michael Rossmeier (AUT-256) and won over. I can’t say that I was perfect in my next heat with van Broekhoven, but most probably the Windsurfers’ God realized that Steven is not exactly Dutch or just remembered some Russian, but my port tack program was better and…I appeared to be on the 6th place. 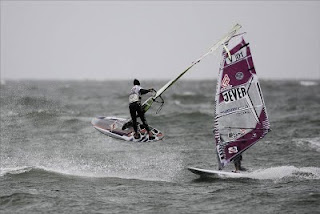 Next one was Gollito, who is objectively more strong than I. And I found out later he was already having the crown of the World Champion of 2009, but neither he nor me knew it at that moment. Should I tell him it before? Motivation is a very interesting matter… In the beginning of the heat I tried out whether he wants to give me some “presents”… No presents were prepared for me – the World Champion was rush and highly motivated, and the chop was not allowing me even sail in switch. I failed some trick on starboard tacks and my last tacks were just to entertain the audience who helped me to gain my best achievement ever.
And as the result – I planned to stay the 10th and finished as №8, so my plans were achieved and exceeded. That’s it!
Normen Gunzlein and Ian Mouro lemos were less lucky. In the first heat Normen was defeated by the Michael Rossmeier. Nobody knows what happened to him but he was failing almost all of his tricks. In the Double Elemination Normen gathered himself together and won three heats but was defeated by the World Champion of 2007 Marcilio Browne in the fight for the 7th pace.
Ian Mouro was struggling very hard. He passed German Johannes Witte (G-687) without any problems but failed in the next heat against Brawzinho and was defeated by Rossmeier in the fight for the 9th place in the Double.

So, three Antillean brothers became the winners of the contest – it was their Moment of Glory! Finally Elton “Taty” Frans became the Winner, Kiri Thode – №2, Everon “Tonky” Frans – №3. To watch them on the water was just amazing and I really glad for their victory.

The Elimination Ladder for second Single was posted on the PWA Website, but according to the forecast I do not think that it will happen. The strong storm is forecasted making ideal conditions for the wave competitions and there are still more slalom heats to go. It looks like the Freestyle season is over and it is time to review the results.

I can say that I am very happy with it. Please find the charts provided by my friends who are analyzing the results of PWA competitions. Now they are trying to find out how to calculate the individual ratings of the sailors with consideration of every performance. This is how my performance chart looks like. 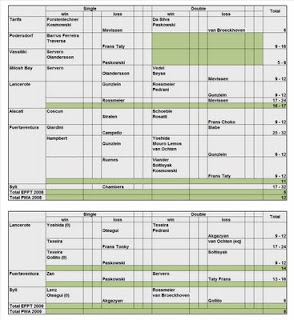 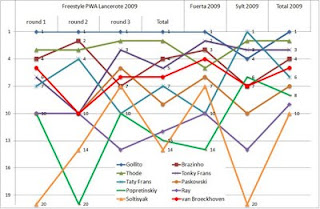 In the following months I am going to actively work on gaining more finance in my participation in the competitions. My first personal project will be the organizing of Russian windsurf camps in Dahab in the “5 Squares” windsurfing school together with Vladimir Morozov, organizer of the contest “Dahab Freestyle Week”.

This evening one of my friends reminded me how I was raising money to go to the one of my first Russian freestyle contest “Russian Wave in Africa 2003” by selling beer near the Metro station. I think that during last 4 years I not only learnt to windsurf … Please wish me Good Luck!

Great thanks for the support to my sponsors – JP-Australia, NeilPryde, MFC, www.vtsport.ru, windsurfing school “Five Squares” www.go-dahab.ru, my friends, relatives, all my fans!