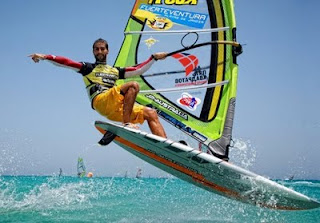 The PWA Fuerteventura Grand Slam is the central and main event of the windsurfing year. It is the 24th time the World Cup in slalom and freestyle is taking place here. Sotavento beach is famous for steady winds and perfect waves. The judges tent, stands, huge tent for riders and supporters and a special tent for evening events are situated on the shore, facing the famous European windsurfing center Rene Egli, Handy TV-screen results announcement system, funny and witty announcer, lots of sideliners, reporters, photographers and of course unreal tricks performed on the water by best sailors of the world. Most of the riders train specially for this event through the whole year. This year the competition started on July 27 and finished on August 1. Prize fund is the same as in Lanzarote – 45K. This time there were 37 male and 10 female registered participants.
Unfortunately 3 JP-Australia riders will not participate in this competition due to injuries – Anxton Otegui (one of the favorites of the contest, #3 in Lanzarote), English champion Andy “Bubble” Chambers (11th) and Dutch Maarten van Ochten (15th). 3-times Freestyle World champion Ricardo Campello, since this year will participate only in wave events. Injured French Nicolas Akgaziyan and Anthony Ruenes could not come as well, but other strong sportsmen had registered – rider JP International German Normen Gunzlein (Vice-Champion of Europe and runner-up of many EFPT contests), Dutch Davy Sheffers (17 year-old boy who is very successful in EFPT this year), Jakub Kosmowski (Polish Freestyle Champion who did not participate in the competitions due to injury this year), Bjorn Saragoza (rising star from Bonaire ), and newcomers from France, Austria, Denmark and Czeck Republic. 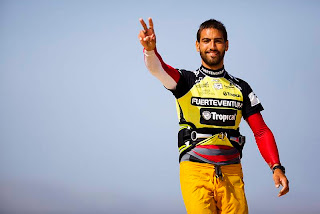 During first two days it was low tide, frequent chop, practically no waves, wind really strong and everybody used only smallest boards and sails. It was possible to conduct men and women Double Elimination but on the day 3 wind was switched off totally and over +40 heats started. Local people call it Kalima.
So, preliminary results: 1st place is taken by 2-times World Champion Venezuelan Jose “Gollito” Estredo. 2nd is Everon “Tonky” Frans from Bonaire who was passing all his competitors easily thanks to his unique style and who invented two new tricks - Front Loop into Flaka and Flaka into Shaka into Flaka this year. 3rd is the World Champion 2007 Brazilian Marcilio “Brawzinho” Browne. 4th – Steven van Broekhoven from Belgium, this year European Champion, who surprised all with his steady sailing and aggressive style. JP International prorider Normen Gunzlein was good enough after long break without training and competitions to share 7th place. His individual style and ability to perform practically all modern tricks on both tacks made all his competitors pretty nervous. Another JP rider Ian Mouro Lemos could not move up above 17th place though he was sailing on a very high level. 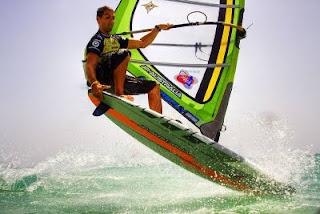 I, Yegor Popretinskiy , now share 13th place and Olga Raskina – 8th. In my first heat I was facing Slovenian Andrazh Zan. The wind was very strong and I was using my NeilPryde FireFly 4.1 sail and JP-Australia Freestyle Pro Edition 90 board. I was very concentrated on my heat, immaculately performed my program and landed majority of my tricks without loss of speed. Double Puneta, Double Spock One Hand, Culo, Air Flaka, Shaka into Flaka, Planning Forward Loop on both tacks, Ponch – this was enough to pass my rival without any doubt. My second competitor was 2-times European Champion Andre Paskowski. I performed even better then previous time. No one in the contest could not exceed my Double Spock One Hand and Double Puneta in perfection and speed. But after long discussion judges gave the victory to the German who managed to perform with his 2 best tricks -Toad and Double E-slider. I lost by 0,5 score. All viewers, participants and supporters could not believe that I had not advanced. In Double Elimination I had easily won over Rafael Cervero Climent from Valencia and then found myself facing Elton “Taty” Frans, very strong competitor from Bonaire, who surprisingly lost his first heat and should be in the first 8. We were fighting for all it is worth. I performed all my tricks, including faultless Burner and my favorite combo Double Spock, which I landed in strong windblast close to the shore between the waves – all around was in white froth and splashes – judges and viewers were excited! But as a result Taty advanced and I was 13th. 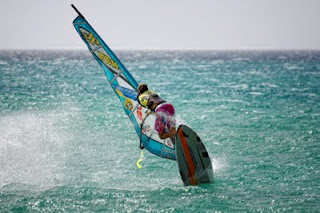 Olga Raskina also showed a good set of tricks in her heats – Spock, Grubby, Clew1st Spock and Puneta. In her first heat she lost to the newcomer PWA German Hayke Reimann. But in the Double Elimination Olga passed the favorite of this contest Laure Treboux, who did not show up, as she injured her arm in the Single Elimination competing with Iballa Ruano Moreno. And in the next heat Olga lost in a very difficult competition with Spanish Nayra Olonso. The heat was really close, but unfortunately our sailor did not advance and now sharing the 7th place.
Without any doubts best of all girls was the World Freestyle Champion Sarah-Quita Offringa from Aruba, who did not leave any chance to others by performing such tricks as Ponch, Air Flaka, Switch Chachoo and Kono. Daida Ruano Moreno is on the 2nd and the 3rd place is taken by Yoli de Brendt from Venezuela.
I`m, Yegor Popretinskiy, as an entire result of the 2 event of the PWA Freestyle World Cup, took 10th place in the overall ranking and Olga Raskina – the 8th!!!
After this contest Olga will fly to Egypt for training and work as an instructor in the “Five Squares” windsurfing school in Dahab. And I will fly to Rhodes, Greece, where from August 6 to August 13 JP-Australia Young Guns Freestyle Camp will take place and where together with the 3-times World Wave Champion Brazilian Kauli Seadi we will teach the kids freestyle moves. 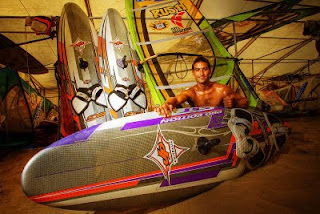 Great thanks for the support to our sponsors – JP-Australia, NeilPryde, MFC, www.vtsport.ru, windsurfing school “Five Squares” www.go-dahab.ru, our friends, relatives, all our fans!