The 3rd freestyle event of PWA World Tour 2010 was held on Sortavento beach in front of windsurfing centre Rene Egli and Melia Gorriones hotel in Fuerteventura. This traditional and large-scale competition was held in this place for 25th time already and included PWA Slalom competition as well as PKRA kite-surfing competitions in freestyle and course-race. 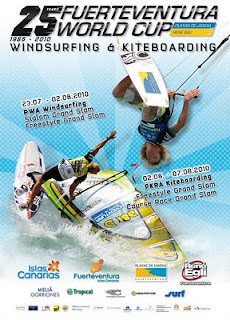 poster of the event
44 freestylers were competing for 30 000 Euro. Famous super strong Canarian wind was blowing every day thus giving the possibility for organizers to finish 2 Double eliminations. All riders were using their smallest sails (from 3,7 to 4,5) and 89-98 liters boards. The judging system was the same as in the previous event – 3 minutes for the start, 7 minutes for a heat, 7 moves on each tack maximum and 4 of the best on to be counted.

As expected, the 1st place was taken by Jose Gollito Estredo, 3 times World Champion from Venezuela. In the 1st Double he was too relaxed and took only the 2nd place, but after the 2nd Single and Double elimination he was not giving his competitors any chance as he was performing such tricks as Gozzada into Burner, Air Chachoo, Push Loop into Flaka, Skopu 900. This victory gave him the 4th World Champion Title before the final event of the year. 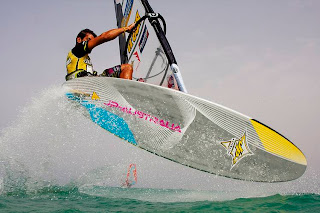 willy skipper, photo by John Carter/PWA
The 2nd place was taken by the World’s vice-champion Kiri Tode from Bonaire, who had won the 1st Double but could not keep his position in the 2nd eliminations. Kiri is well trained on the flat water and was performing amazing new school tricks Kono into Spock, Spock into Kono, Spock into Culo, and combos with Burners and Air Funnels. But it was not enough as during the second Double elimination huge waves came and the glory came to those who were able to perform big air moves like Push Loop, Back loop and Air Chachoo.

Unexpectedly the 3rd place was taken by the Belgian Steven van Broekhoven, the European champion 2009 and 2010. It is his second time on the PWA podium this year. Steven is performing all the latest freestyle tricks in a very technically strong, high amplitude and stylish manner. He can easily jump Burner One Hand into Flaka, Air Funnel 900 or Push Loop, which one he learnt in South Africa this winter.

The 4th place was taken by the Style Icon in Freestyle from Bonaire Tonky Frans with his high amplitude Bongkas (Forward Loop into Flaka), Push Loops, Back Loops and Air Chachoos. And his brother Taty who performed Triple Spock One Hand, Double Forward Loop and Burner varieties was the 5th. 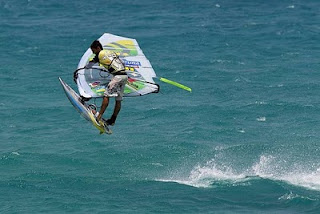 shaka, photo by John Carter/PWA
Young German waverider Phillip Koster, the winner of Pozo 2009 and 2nd in PWA event in Pozo this year was also competing here. Here he took only 23rd place as he was not lucky with the waves in his heats, but he was performing good freestyle moves like Toad, Shaka, Shaka into Flaka, Air Flaka, Double Flaka, and some switch tricks including Burner. By the way – in one of his last heats he managed to find a launch pad and performed his famous Double Forward Loop.

I would like to mention 15 y.o Youp Schmit from Bonaire who managed to take 17th place in his first ever PWA contest. He is very steady on the water and can perform practically all new school tricks. I’m sure that soon we will see this guy on the top.

I’m, Yegor Popretinskiy, rider from Russia, in this event shared 11th place with Dieter van Eyken from Belgium and Max Row from UK.
I came to this event straight from Lanzarote, where I took the 5th place in PWA event. I was very serious about the next contest and was training practically every day for 3 weeks. I’d polished some of my tricks - Toad, Switch Kono, Ponch One Hand Into Flaka, Spock into Culo, Burner into Flaka, and was ready to fight for 100%.
But unfortunately in a week before the start I had seriously injured my right ankle landing Ponch. I even thought that I’ll not be able to participate, as at the first stage I could hardly move. Slowly with the help of creams and exercises I managed to develop it, but could go on the water only wearing the surgical sock that I’d borrowed from Robby Swift. This sock was pretty “tired” and was rubbing my foot and hindering movements allowing to perform only easy tricks with high amplitude - Shaka, Air Flaka, Forward Loop, Ponch One Hand, Double Spock One Hand, Shove-it into Spock, Double Puneta, Double Flaka. 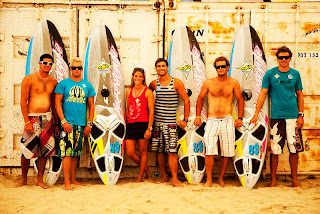 JP-Australia International Team, photo by John Carter/PWA
This time JP Australia team-riders were allowed to use new freestyle boards from 2011 collection that I was testing last autumn in South Africa with JP shaper Werner Gnigler. These boards can work well in the hard conditions, they are very strong, it is a pleasure to perform tricks with them and they have beautiful colorful graphics. All riders of JP team were taking part in this contest Andy “Bubble” Chambers from UK, Ian Mouro Lemos from Brazil, Maarten van Ochten from Holland and European champ of 2008 Antxon Otegui from Spain, who unfortunately had been seriously injured the day before the competition and was unable to compete. The Guys performed the excellent show on the water, but could not reach high positions as the competition this year is very hard and tight – very often 0.5 point was crucial for the result of the heat.

I am quite happy with my result as even being injured could show the worthful performance to the audience, judges and sponsors, being the best from all JP and NeilPryde team again. Now I’m 21st in the overall PWA 2010 ranking but I have a good chance to be in the Top 10 if I show good results in the final event which will take place on September 24- October 3 in Sylt, Germany.

I want to thank my sponsors - Vtsport.ru, JP-Australia, NeilPryde, MFC, windsurf school Five Squares, and also my family, friends and all who support me and believe in me! 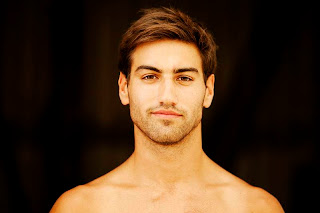