The 1st contest of the European Freestyle Pro Tour with the prize money of €5000 took place on the Milos beach in Lefkada, Greece on 27-29 May 2011.
21 riders from 9 countries were registered and were settled in apartments of wonderful hotel Milos Beach Resort. 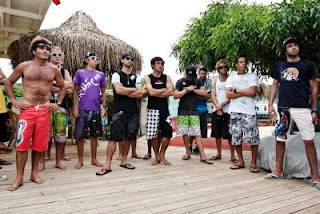 photo by Flora Bikich
The organizer of the event was the famous and respected Austrian windsurfer Tom Hartman, who also held competitions of Euro tour last year. The head judge was Marek Antol from Slovakia, who judged freestyle competition for many years.

The main favorites of the contest were Edvan de Souza from Brazil, Stam Pramponas from Greece, Adrian Beholz from Germany, Niklas Strahlen from Sweden, Adam Gavriel from Israel, Mattia Fabrizi from Italy and me - Yegor Popretinskiy from Russia. 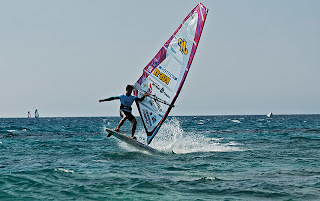 photo by Flora Bikich
Forecast at the time of the contest looked quite poor, but the hot sun of Greece and clear sky helped the thermal wind to blow up in the right direction and it was enough to start heats. Riders used their biggest sails and boards to show all what they can do in these conditions.

Unfortunately the wind was not enough to completely finish 1st Single Elimination and heats culminated in the semi-final between four best riders – Mattia Fabrizi, Niklas Strahlen, Adam Gavriel and Gabriele Varrucciu. Lightweight and good luck of finalists helped them to pass through the strongest opponents in very difficult conditions. 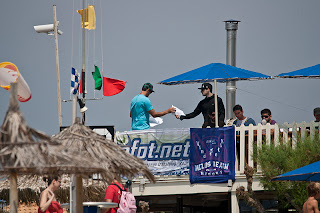 photo by Flora Bikich
In my opinion, in some heats it was hard to understand who was better and athletes were just really surprised by results. For me the most interesting heats were between me and Adam Gabriel, Max Rowe and Gabriele Varrucciu, Mattia Fabrizi and Edvan de Souza.
Heat against English Max Row and Italian newcomer Gabriele Varrucciu was very close. Both of them pull grate tricks and I think Max had more variety and amount of moves but somehow Gabriele pass through with his ponch.
In heat between Mattia and Edvan was super light wind and Brazilian just cannot even perform all he can. Both of riders has a lightweight but for Italian was easier to bring here more and bigger sails by his car and he had more choice. Mattia was pumping full power and was able to jump something, while Edvan just stood in one place. To my opinion this heat could have been re-started.

My heat against Adam was really close in scores as the judges told. But when I checked judge’s lists I was really surprised and disappointed that not all my moves were counted or just named completely wrong and without my complications. I understand that it was hard to see tricks performed far enough in the beginning of the heat but… I was performing planning grubby sail 360, meev, e-slider 360, but in the list they were stated as \ just grubby without any plus, flaka diablo, puneta with minus and etc probably due to misunderstanding. Best move of Adam was air flaka and he made two moves more then me, but how can you make decision in some heats based on the number of moves but not the quality of performance and in another heats by opposite way? Yes, I was upset by my result and I know exactly that my jumps were not counted as expected. I can assume that with such drawbacks in judging there was the option to re-run the heat. 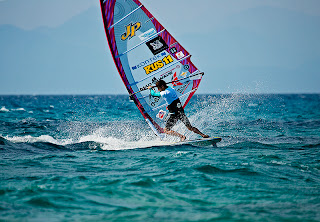 photo by Flora Bikich
Anyway competitions are competitions and it is very hard to judge freestyle. And I’m really glad for the winners and especially for Adam, who shared first place in this contest. He's a great windsurfer and I hope that this result will help him to find good sponsors to participate in all competitions of PWA and EFPT events in the future.
I also want to congratulate the team rider of JP/NP Tilo Eber from Germany with the prestigious 5th place! Good job Tilo! 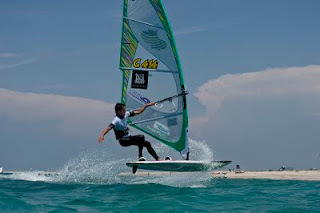 Tilo Eber, photo by Flora Bikich
I want to thank Christos Stratos, owner of Milos Beach Resort for the hospitality and the fact that the EFPT event was held again here at north of Lefkada. It was a wonderful time on Milos and I congratulate the winners!