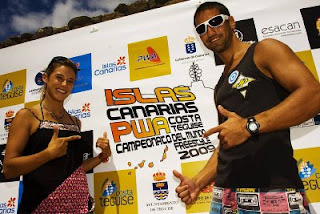 PWA windsurfing World Tour on Canary Islands was traditionally started on Costa Teguise beach in Lanzarote. The Opening ceremony was held in Sands Beach Hotel on July 29 in the evening. This year 32 male sailors and 11 female were registered for the contest.
So, the heats started. Japanese sailor Hiroumi Yoshida was appointed to be my first competitor, but he reported sick, so I passed my first heat without any troubles and appeared in the best 16. As a matter of fact it was found out later that he did not arrive at all and it was a miracle how the organizers added him to the list of participants. In the next heat I faced Antxon Otaegui – European Champion 2008, team rider of JP/NeilPryde International. I wanted to win very much! We competed equally well – we both performed several tricks in switch stance, front loop, shaka and ponch, but the Spanish landed high air chacho thus ruining all my efforts. There were some chances, but to defeat Antxon in his home island, in the first heat, in front of his sponsors and fans you should be at least twice better than him. The results of the 1st Single elimination did not surprise anyone. There was only one “new face” – Belgian Steven Van Broeckhoven, leader of the European Tour, all others are as usual Jose “Gollito” Estredo, Kiri Thode, Marcilio Browne, Antxon Otaegui, 5th position was shared by Steven, Frans brothers and Nicolas Akgazciyan. 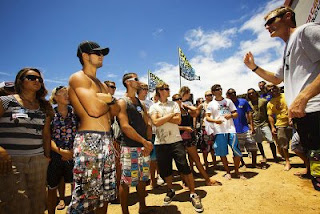 Double Elimination started immediately. My first competitor was Francisco “Sassa” Teixeira from Brazil, who is now #7 in the European tour. I had not my best heat, fall several times, but managed to perform 4 tricks on every tack and passed to the next round. In my second heat I faced the champion of Italy Mattia Pedrani. Mattia is a very serious competitor especially in strong and disturbed wind. The heat was not easy, but the luck was not acting for Mattia. I performed very clear, being very confident in my tricks, no falls, good amplitude and high speed. I had advanced to 9-12 and had another opportunity to forward through the heat with Nikolas Akgazciyan, one of the best European freestylers. I was very focused, had several tricks in switch stance with diablo, air flaka, ponch, shaka one hand and culo, but the judges were very impressed by high table top into forward loop, great shove-it into spock, and spotless one handed Chacho performed by Nikolas at the end of the heat. Later on the shore he said that it was his best performance ever.
Our best Russian female freestyler Olga Raskina was not lucky in that day. In her first heat she had to face the famous Nayra Alonso. The wind was disturbed, with serious chop on the water, making the conditions very difficult. Nayra were falling a lot. Olga had a chance to advance if she had performed her program clearly, but Nayra was more successful. In the second round Olga was stopped by one of the favorites of this season Yoli De Brendt from Venezuela.
Just after that the second series began. I started in the first heat. And by chance again facing Teixeira, whom I defeated again. In the second round I had to compete against bonairian Tonky Frans. I was pretty confident with my moves, but Tonky landed spotless triple spock… it’s a shame… After second single elimination I am 9-16.
Olya Raskina competed with Nayra Alonso again and was very close to victory. Japanese Junko Nagoshi showed fantastic result advancing to the final and being defeated only by Sarah-Quita Offringa, Yoli de Brendt was 3rd, Laure Treboux – 4th. 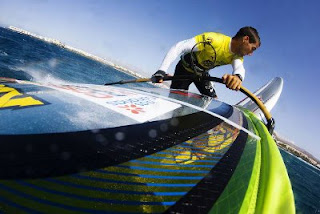 Men’s heats were in the logical order. Anthony Ruenes (here he goes!) with his beautiful no-hand funnel pushed off Taty Frans and advanced to the best 8. In the third round both of my first day “bullies” - Otaegui and Akgazciyan were facing each other . This time the French was more successful - tweaked table top into push loop seemed to be a Roland for an Oliver against Antxon’s double flakas. The Spaniard was great but the judges had used all the reserve of the sympathy towards him in the first series.
Kiri Thode looked absolutely awesome: air funell into funnel, burner into flaka, planning kono, spock into culo. In the second semi-final 2 strongest sailors of 2009 were competing; Brawzinho against Gollito. Browne started with air chacho, Gollito replied with tweaked push loop, both were performing stylish and beautiful tricks of the top-level, but the judges put the style of the Brazilian ahead of slightly crumpled but somewhat more complex sailing of the World’s Champion. Bbrowne and Thode are in the final. Brawzinho had a total victory - double air funnell, air shaka, air chachoo, back loop were stylish and confident.
The last 2 days of the competition were exhausting. On July 3 wind was over 20m/s and the waves were the size of the mast. The contest started from early morning, at 10.30, but after first 2 heats the safety boat was crashed and judges’ cabin was almost demolished by the wind. Organizers called the maintenance, but the repair works took about 3 hours.
In the second Double Elimination when I was competing against Maarten Van Ochten after high ponch and high speed puneta my mast base was broken. My sail was fixed only by 2 safety strings designed just for emergency return from the water. I was falling, but still performing tricks - shaka, e-slider, front loop... Eventually Maarten landed air chacho that he just learnt and thus advanced from the heat.
After that I was staying on the beach waiting for the 3rd single. My heat was the last and again I had to compete with Teixeira. The beach was almost empty, the wind was disturbed, waves were frequent and broken, and sun was not very bright… Conditions were very complicated – I was using my JP freestyle 99 lt. and NeilPryde FireFly 4.1. I managed to land shaka only from 3rd attempt, then planning e-slider, flaka, front loop, spock, funnel and again, for the 3rd time defeated the Brazilian.
Olga Raskina competed with Iballa Moreno. Olga performed excellent spock on NeilPryde Zone 3.2, front loop on the starboard tack and fall down, then she tried on the port tack from the wave, but in the air decided not to close the sail and as a result wiped out having a half-mourning.
The next day wind was slightly weaker but the waves still 3-4 meters high. To be able to accomplish 3rd single and have 3rd Double judges appointed the skippers meeting at 9.00. At 9.30 the girls started the heats. Olga was facing Iballa Moreno, performed couple of tricks – spock, front loop on both tacks, tried other tricks and overpassed Iballa, who managed to land only front loop. Then Olga was competing against Sarah-Quita Offringa, who was brilliant as usual - shaka, switch kono, e-slider, flaka. In the first heat of 3rd Double Elimination Olga defeated Xenia Kessler from Denmark, but could not go through Yoli van Brendt from Venezuela. As a result Olga Raskina gained the honoured 9th rate in this competition. 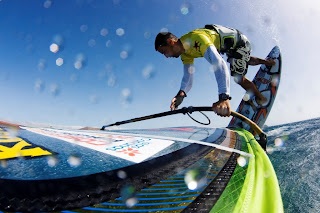 In the 3rd Single I had to face Jose “Gollito” Estredo – 2 times World Champion, who was defeated in this contest only once by the eminent Marcilio Browne, but he did not show up to the heat. It seemed that he wanted to sleep and rest as after his 2 triumphs in 2 Double eliminations it was clear that he was the winner. It’s a pity but then I lost against Andre Paskowski who amazed the judges landing spotless high back loop highly valued in this competitions. 3rd Single closed with the victory of Kiri Thode in male contest, Tonky Frans 2nd with his new trick Bongka (Front loop into flaka) and in female - victory of Sarah-Quita Offringa, Junko Nagoshi is 2nd.
Single was followed by the lunch break and 3rd double started immediately after. I was competing with my room-mate Phil Soltysiak. We were equally - we both landed high shaka, I performed culo, he – toad, couple of good on handed switch moves, front loops, I - air flaka and high shove-it, he – switch flaka and flaka diablo… After long discussion judges decided that Phil advanced. He was very happy, I was glad for him as well. I was slightly disappointed of course, but finally I was 13th and he was 14th, which cheered me up.
Never the less, taking into consideration that I was not participating in any competitions for the entire year, my first start after long break was pretty successful. I repeated my best result in the PWA tour and think that I had impressed judges and competitors by the level of my sailing.
As for tradition the last day was closed with the victory ceremony on the Las Cucharas Beach. After the contest some of the sailors moved to Pozo for Wave World Cup contest, some - to Fuerteventura for training, some will go home to pass their tests in the Uni.
Olga, her boyfriend Andraz Zan from Slovenia and myself went to Fuerteventura for all August to be well prepared for the second leg of the PWA Freestyle World Tour - PWA Grand Slam Sotavento Fuerteventura 2009 that will be held on July 27 – August 1. Our good friend Anton Volgin joined us.

Thanks to all our sponsors (Vtsport/JP-Australia/NeilPryde/MFC/FiveSquares), fans, judges and PWA organizers! Aloha! 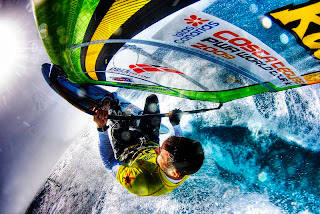