Today great wind blew in the afternoon and organizers started the first single elimination. The judges decided to appoint 7 minutes for a heat. We have to do 6 moves on each tack and 3 of the best of them will be counted. Also, we can fall 3 times on each tack. We were lucky to have heats up to the semifinal and the spectators were lucky to see what the modern freestyle is. 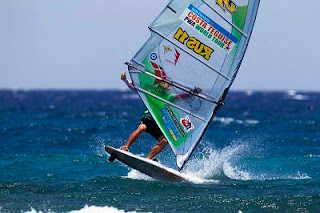 I had a really good day, as I managed to pass two rounds and now share the fifth place. In the first heat I was against the Frenchman Damien Potier and passed quite easily with my Shaka, Culo, No hand Flaka and switch moves. In my second heat I had to deal with freestyler from Aruba Quincy Offringa (№ 11 PWA 2009). I managed to win as made a few of good tricks - Shaka Diablo, Double Spock, Planing Forward, Flaka Diablo and a few tricks in switch stance. Than I had to sail against Gollito Estredo, but the miracle did not happen and he won our heat with his new crazy move Matador (Bob jumping back to the sail).
I am satisfied with my performance today, and I think that it compliles with all the goals i'd set.
Also I want to note excellent sailing of Brazilian João "Janjão" Henrique who passed through 2 heats as well. And of course I want to congratulate my Canadian friend Philip Soltysiak who's sailing was unbeleivable today and who managed to reach the semifinal. Good job, Phil!
Tomorrow the skipper's meeting will be at 09:30 with a first possible start of 10:00. 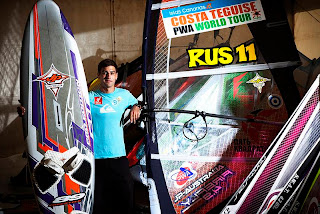