First contest of PWA World Tour 2011 in freestyle and slalom took place in Southern Vietnam on Mui Ne resort beach on 25.02 -05.03 . 23 freestylers and 45 men and 25 women in slalom were competing for 85 000 prize money. Vietnam met the sportsmen with increditable hospitality and all were finetuned to one wave. 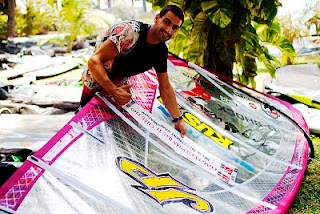 photo by John Carter/PWA
The contest started with freestyle. The wind was blowing nicely making it possible to hold 2 Double Eliminations and the winner was the PWA vice-champion 2009 from Bonaire Kiri Thode (NB-61) being the winner of the PWA contest for the first time in his life, In the final heat Kiri landed the trick that could be peformed by him only - Culo One Hand with Pirouette. 2nd place was taken by 4-times World Champion Venezuelan Jose Gollito Estredo (V-01) and the 3rd was the PWA vice-champion 2010 Taty Frans from Bonaire.
The level of the competitors was very high and it was very difficult to decide who was the best in every heat. The conditions were pretty challenging - hammering wind and broken chop equalized the chances of the competitors. All the riders were doing their best and were performing all the variety of the most recent tricks: Burner or Funnel 900 One Handed, Skopu Into Puneta, Air Kono, Spock Into Culo or Culo Into Spock, Air Flaka Into Flaka. And in the finals it was possible to see such tricks as Back Loop, Push Loop, Double Forward, Forward Flaka, Air Chachoo. Veitnam had never witnessed something like that! 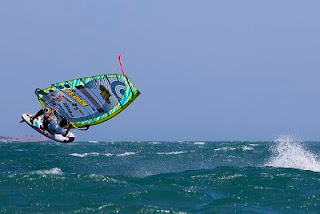 Forward Loop photo by John Carter/PWA
JP/NeilPryde team was represented by Yegor Popretinsky (RUS-11), Andy “Bubble” Chambers (R-540), Ian Mouro Lemos (BRA -85), Tilo Eber (G-414) and Bryan Metcalf- Perez (US-505). Unfortunately Dutch JP/NeilPryde rider Maarten Van Ochten was not able to participate in this contest due to his injury. Andy and Yegor shared 11th place, Bryan was 15th, Ian - 17th, Tilo – 18th. The guys were performing great sets of tricks in the heats thus showing high level of riding.
The best tricks of the JP/NeilPryde team were Yegor’s Forward Loop Diablo, Andy’s Back Loop, Bryan’s Shaka, Ian’s Air Funnel and Tilo’s Skopu. In March Yegor is planning stay in Russia and to train in Egypt, Andy in South Africa, Ian at home in Brazil and in April all the guys will meet in Mauiii for photo shooting. 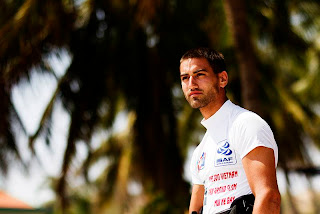 photo by John Carter/PWA
Second part of the contest was devoted to slalom but the wind was much slower so it was possible to have only 4 sessions both for men and women. In men’s contest the first place went to the Legend of Windsurfing – Bjorn Dunkerbeck from Switzerland (SUI-11)! The second was unbeatable JP/NeilPryde French Multi-Champion of the World Antoine Albeau (F-192), 3-rd Jimmy Diaz (ISV-11) who is the President of PWA. In women’s slalom the 1st place was taken by 2 times World Champion in freestyle Sarha-Quita Offringa from Aruba (ARU-91) for the first time in her life, second was 14 times World Champion Karin Jaggi from New Zealand (Z-14) and the 3rd –Alice Arutkin from France (FRA-111). 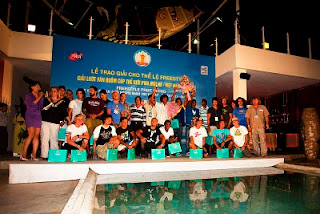 Our congratulations to the winners! photo by John Carter/PWA
The PWA World Cup competitions in Mui Ne were organized on the very high professional level and we hope that it will become a tradition.
We have 6 more contests in slalom and freestyle ahead. Next freestyle event will take place in Podersdorf (Austria) on Neusiedlersee lake on 29.04-04.05 and the slalom event will be in Korean Uslan on 14.05-20.05.